Built in Aberystwyth, by St. Daniel Scotius in the 9th Century, he was responsible for founding the site and erecting the magnificent Monastery. However the site foundations are much older, having been built possibly thousands of years before.

In the 13th Century it renovated by Roger Bacon, who rebuilt the facade in the Gothic style, with the intent of creating a suitable space for a laboratory.

In its long history, it has served many roles, including that of an army barracks and a prison, in which thousands of people were murdered or tortured.

The site, both over-and-underground, is an extremely important location in all the games it's featured in.

The only location in Koudelka, it was burnt to the ground as a result of what happened during that fateful Hallowe'en night.

It was purchased by Patrick Heyworth some six-to-nine years before the beginning of the game, as a result of the death of his wife, Elaine Heyworth.

He was accompanied by Ogden and Bessy, who became the caretakers to the place. With aid from Ogden, and with the advice from Cardinal Albert Simon, who was also responsible for selling Patrick the Emigre Manuscript, he began his attempt at bringing Elaine back from the grave.

Years later, in 1898, the wandering medium, Koudelka Iasant, summoned by a ghostly cry for help, headed to the monastery in order to investigate. There she came across the injured Edward Plunkett, who ventured to the monastery based on rumours that there were whores.

Later the pair came across Father James O' Flaherty, who had traveled to the abbey in search of the Emigre Manuscript.

Finding the acclaimed mystic and scholar, Roger Bacon asleep in a coffin, hidden in the Library, they learn about the history of Patrick's experiment, and decided to free Elaine's spirit and defeat the evil that her body had become.

After burning down the Tree of Life, and being chased to the bell tower, the party managed to finally lay Elaine's body to rest, though at the cost of James' life. The fire that they started, consumed what remained of the Monastery.

In 1913, sixteen years after the events of Koudelka, Albert Simon captured Koudelka and brought her to the ruins of the monastery. Simon sought to use her as a conduit to unleash theNeameto Float, an ancient floating temple, which would in turn, summon Meta-God, an alien of near god-like power, who would proceed to destroy the world.

Yuri Hyuga and company fought with Simon and his contract, the demon Amon, in the same room where the ritual to resurrect Elaine was performed years before, in order to stop him. They succeeded in defeating Amon, but this played into Simon's plans, for Amon's defeat released enough energy to summon the Float.

Roger Bacon still lives near the site, having built a home and laboratory for himself in the time between the two games.

Father O' Flaherty's grave can be found in the exterior of the monastery.

The surface ruins cannot be visited in this game, but Yuri and his party can explore the expansive underground ruins of Nemeton. First to retrieve the Emigre Manuscript, and the second time for an optional sidequest, where they delve even deeper underground. At the very bottom they can confront the demon Orobas, who can be used as a summon for Anastasia.

Basement
Add a photo to this gallery 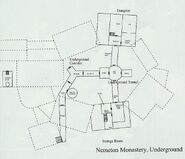 Underground
Add a photo to this gallery 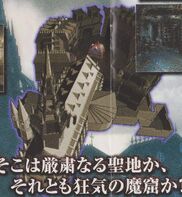 Early untextured CGI render of the complex.
Add a photo to this gallery

A nemeton was the name given to Celtic holy places, or places of worship.

Retrieved from "https://shadowhearts.fandom.com/wiki/Nemeton_Monastery?oldid=38224"
Community content is available under CC-BY-SA unless otherwise noted.