Astaroth after being freed from all constraints.

Freed of Nicolai's ego, his terrible presence drives men to slaughter each other like crazed animals. This suits Astaroth, who prefers his own hands unsullied.

Astaroth has gained lots of HP, but he still has some of the traits from his first form.

He has his annoying Delay physical attack, but you can counter that with Arc Gale. Still, it's a good idea to keep an eye on that turn meter. Oddly enough, he's not immune to Delay himself, so equip the Delay 2 and Delay 1 on your main physical fighters. This will help a lot.

He still loves casting Bright Crest, so Yuri and Lucia should look out. One member of your party should be ready to cast Arc Cure whenever Bright Crest damages your party. Remember, this causes S-Def Down, so kill him quickly. Arc Barrier isn't a bad idea either. Look out, though, he can cast Barrier on himself!

Here you have two good options, the first is casting things like Arc Rage, Energy Charge, Lucia's 100% critical oil, or even all three of those. The second option probably won't apply for a lot of people, but it could still work.

If Anastasia is in your party and has learned the "Remove" album from Oscar, she can blow away Neo Astaroth's Barrier if you play a S-Atk kind of game. Here's something important, at low HP he'll cast Cure Plus on himself! It only heals around 800 HP, so just chip away at his health, and you will emerge victorious. 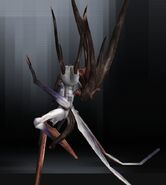 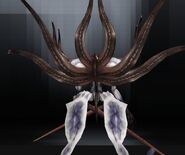 "Astaroth ~ Battle with The Fallen Angel" is the unique battle theme that is played when fighting Astaroth and Neo-Astaroth. Select sections of the music are also played in cutscenes that precede both the fights.

Its corresponding insanity track is "Crack Your Mind ~ The Fallen Angel Runs Wild".

"Neo" comes from the Latin, "Nova" which translates as "New".