A representative for the Vatican, and the main antagonist of Shadow Hearts: Covenant. He asks for Karin's help in obtaining the Holy Mistletoe to get rid of the "Demon of Domremy", temporarily becoming a playable character at the beginning of the game. After he uses it on Yuri, he reveals his true nature as scheming and relentless.

Disguised as a priest and exorcist, he was sent to investigate the Demon of Domremy. He is actually a heretic whose charming smile hides his darker nature.

Disguised as an exorcist from the Vatican, he is actually a Knight Priest sent by a secret society to destroy the Domremy Demon. Cursed Yuri with the Mistletoe relic.

Born in 1887, he was the bastard son of Tzar Emperor Nicholas II and an unnamed peasant woman - an illegitimate heir to the Russian throne.

His mother died when he was young, leaving him orphaned. Angry at the Tzar, he sought vengeance, and became a member of the secret society, Sapientes Gladio, and quickly rose through the ranks, becoming Rasputin's right-hand man.

Rasputin, seeing his potential as a tool, persuaded the Vatican to make the young man a cardinal, and enrolled him into the church. They shared with each other as similar desire for the future; to take over the Russian throne, conquer Europe, and further spread the influence of Sapientes Gladios across the globe.

Ordered by Rasputin to eliminate the enemies of Sapientes Gladios - he was tasked specifically with defeating Albert Simon, with the initial idea of using the Holy Mistletoe - a cursed artifact - to drain him of his powers. However, before his plan could be put into action, Yuri Hyuga slew both Albert, and the being he tried to summon.

Realising that Yuri had become more of a threat than Albert, and wishing to make up for his failure, he decided to eliminate Yuri, before he could become a potential problem.

Following reports of a "demon" defending the sleepy village of Domremy from an advancing German army, he offered his services as an exorcist to rid them of this demon, hiding his true nature and purpose behind a facade of well-meaning assistance.

Here he first met Lt. Karin Koenig, who had been mysteriously spared by the demon, and travelled with her to Apoina Tower, to retrive the Mistletoe, and enact his plan - formally for Albert - on Yuri.

Aided by a small detatchement of German soldiers, they advanced on Domremy and confronted Yuri in the small village church. His true vindictive nature emurged; he ordered Lenny and the Clawed Soldiers to kill the German soldiers, and took a young girl, Jeanne hostage. Betrayed, Karin pulled a gun on him. Furious at her, he charged only to be swatted away by Yuri. However, his goal had been achieved; during the struggle, he impaled him with the Mistletoe, robbing him of his powers, but was unable to prevent Yuri and Karin's escape.

Under the orders of Rasputin, he began meetings with Kato - in his function as the Japanese diplomatic envoy - to be an ally to Russia, and future Emperor Rasputin.

However, still embittered by his bastard heritage, and his claim to the Russian throne, he began to plot to usurp Rasputin - conducting secret meetings with Kato, who agreed that Japan would ally itself to Russia, be the emperor either Rasputin, or Nicolai. The price for the negotiations however, was the acquisition of the Émigré Manuscript.

Seeking the document, Nicolai had Roger Bacon captured and imprisoned, first in their Italian HQ, before transferring him to the, more secure, St Marguerite Island. He attempted to interrogate Roger to divulge the manuscript's whereabouts, to no success.

Frustrated, and seeking more power, he began to ponder the connection between Albert Simon, and Yuri, and came to a realisation - a soul pact.

He began investigating, and eventually discovered the location of the Nahash Temple - sunken ruins in the Southern Mediterranean Sea, which housed one of the three gods of destruction, Astaroth. He persuaded Rasputin that it was worth further investigation, quietly keeping the matter of the temple's hidden power to himself.

Meanwhile, much to Nicolai's frustration, Lenny had been tricked into revealing Roger's former location of their Italian HQ. Attempting to use this failure instead, to his advantage, he flew to Italy via airship, and caught up with Yuri and party, making a bargain; Yuri would bring him the manuscript, and he would give Yuri, Roger.

As Yuri travelled to the deep Neam Ruins to recover the manuscript, Nicolai, Veronica and Lenny made their way to the submerged Nahash temple. Fighting their way through monsters, they eventually defeating the temple guardian, he dismissed his subordinates. There, in the centre of the temple, an altar stood, bearing a ring. Placing on the ring, Nicolai gained a soul pact with Astaroth.

Having given the party Roger's location, a trap had been set, capturing them, and bringing the long-sought manuscript into Nicolai's hands. Despite this however, he was repulsed by the tome's cursed status, but nevertheless, returning to Russia, took it with him to complete his negotiations with Kato.

Rasputin was satisfied with Nicolai's success, but was ultimately suspiscious of his activities, and suspected him of ulterior motives.

Yuri, meanwhile, had regained the power of Amon, and sought to defeated Rasputin. As Amon battled Rasputin, and the Sapientes Gladio airship bombed Petrograd, Nicolai calmly watched the struggle from afar, patiently awaiting its outcome.

Rasputin - driven to the brink by Amon, invoked his Soul Pact, and summoned the Idar Flamme, but became possessed by Asmodeus. Nicolai met the entity, Asmodeus-Rasputin in his throne room.

Appalled by Asmodeus-Rasputin's change of plan, to instead plunge humanity into ruin and war, instead of rebuilding the might of Russia, he calmly told Asmodeus-Rasputin that his plans would fail, and he be unable to defeat Yuri - as he lacked his strength of will.

Mockingly, Asmodeus-Rasputin, questioned Nicolai's own powers as a "weak human", until Nicolai finally revealed his pact with Astaroth. Amused, Asmodeus-Rasputin announced that the two would settle things later, after Yuri's defeat.

Quietly confident of Yuri's victory, Nicolai leaves to return to Apoina Tower, to open a sealed vault of malice and infect the world with its darkness.

Using the power of Astaroth, he invades Karin's dreams and reveals his true feelings for her; that he loves her, and that Yuri would never be able to provide her the comfort that she needs, and begs her to join him. Disgusted, Karin refuses. Prompting him to try to strangle her, but he fades away before he can grasp her throat, screaming her name.

Murdering the Vatican guards, he made his way to the apex, and awaited the party, having sensed Rasputin's demise. Driven by his ego, and fuelled by his desire to over-come Yuri, he opened the stored vault and unleashed the malice, flooding the world with the negative energy, before transforming into the fallen angel, Astaroth.

Even with the might of Astaroth behind him, he was defeated by Yuri, and left awaiting death. However, Kato, upholding his part of the negotiations, teleported in to save him, first sealing up the vault to halt the flow of malice - though the damage was already done.

Abducted by Kato, and imprisoned in the Hojo Research Lab, Nicolai became an unwilling experiment for Dr Hojo and the auspices of the Japanese government, as they attempted to extract Astaroth from him, while using Nicolai in their further negotiations with Russia.

Not wishing to kill him, an attempt was made to extract the demon, resulting in the accidental creation of Shoki, when the negative energies of Astaroth transmuted a dog - resulting in an highly destructive beast.

Continuing his experiments, Dr Hojo unintentionally obliterated Nicolai's ego - the only thing that was keeping Astaroth dormant in his soul. His body now fully possessed, he became Astaroth-Nicolai, and teleported away from the facility to the Immortal Mountain to recover his energies.

Pursued by Kato and the Mutant Apes, Nicolai's soul had been subsumed by Astaroth. When Yuri had defeated Neo-Astaroth, Nicolai's soul was freed. In a rage at the failure of his plans, he attacks Yuri and trying to further the Mistletoe's curse, before being beaten away by Kato. Picking up a broken shard of Neo-Astaroth's claw, he tried to stab Kato.

Protecting her master, Ouka took the fatal blow, right through the heart. Enraged, Kato grasped Nicolai by the head, and crushed his skull, finally killing him. With his last words, he screamed Karin's name, before his lifeless body was tossed aside.

Nicolai is able to have up to three Hit Areas on the Judgement Ring.

His special skills are White Magic, where he uses Light-elemental spells to heal his allies, and damage his enemies. All his skills are available for normal Covenant characters to use by equipping the correct crests.

† Divine Light is only available in the director's cut of Covenant, during the second time Nicolai becomes playable during the game. Interestingly, despite this, in all the regular versions of the game, Nicolai can use this move when he is in beserk status against the Gargoyle.

Nicholai comes equipped with his own sword, and a unique armour

Nicolai has also appeared in Chaos Wars as one on the many cross-over characters from the Shadow Hearts series, serving as the representative antagonist.

His ultimate skill is to transform into Astaroth, and use "Bright Crest", the same as in Shadow Hearts: Covenant

Curiously Astaroth's power is represented by Nicolai's cross, which was a gift from his later mother - a detail that is never mentioned in the original game.

His name in Chaos Wars is Nicole. 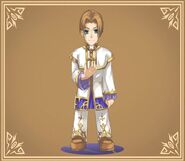 Nicolai's Cross
Add a photo to this gallery
Retrieved from "https://shadowhearts.fandom.com/wiki/Nicholas_Conrad?oldid=37535"
Community content is available under CC-BY-SA unless otherwise noted.