Last of the Mutant Apes to be made by Kato, she has no machine parts but is herself a living weapon. She was created using genes from Yoshiko Kawashima.

""See no evil" Ouka of the Mutant Apes. She was created by Kato from the DNA of Yoshiko Kawashima who died in Shanghai. Her body itself is a lethal weapon."

"See No Evil" Ouka. Trained along with the other Mutant Apes to be a killing machine wholly obedient to Kato's commands, she fell in love with him and wanted no more than to be by his side to ease his pain.

Unlike the other Mutant Apes, she was created anew. Though she is the living semblance of Lieutenant-Colonel Yoshiko Kawashima, she is her own person. Kato utilized the magic of the Émigré Manuscript only to enhance the growth of the fetus and speed her aging to her adult form.

Ouka is aware of her origins, and only envies the dead Kawashima for the place she holds in Kato's heart. Sadly, she herself dies shielding Kato from Nicolai trying to stab him with Astaroth's claw in the burning core of Mount Fuji.

In the brief time that she and the other Mutant Apes are playable, she uses a unique gun to shoot her enemies from a distance.

she can have up to three Hit Areas on the Judgement Ring.

She and the other members of her team also have access to a unique combo: "Lightning Flash" Kato later uses her soul to aid him in battle, where she transforms into the Yakakani Gem. 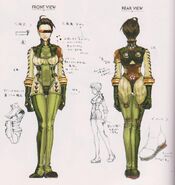 Retrieved from "https://shadowhearts.fandom.com/wiki/Ouka?oldid=37329"
Community content is available under CC-BY-SA unless otherwise noted.