Pachinko (パチンコ) is a type of mechanical game originating in Japan and is used as both a form of recreational arcade game and much more frequently as a gambling device, filling a Japanese gambling niche comparable to that of the slot machine in Western gaming.

Pachinko parlors are widespread in Japan, and they usually also feature a number of slot machines (called pachislo or pachislots); hence, these venues operate and look similar to casinos. Modern pachinko machines are highly customizable, and usually feature some interactive element.

Gambling for cash is illegal in Japan. Pachinko balls won from games cannot be exchanged directly for money in the parlor. The balls also may not be removed from the premises, and are engraved in identifiable patterns showing to which parlor they belong.

Balls won at the parlor are exchanged for prizes or tokens, which can be exchanged for cash at a place nominally separate from the parlor. One prize exchange may serve a number of nearby parlors, getting a percentage of the prize's value when it is collected by the parlor.

Featured elements include redone and restyled cutscenes and "battles", featuring the appearances of many characters and boss enemies from Shadow Hearts. Also the use of the Judgement Ring.

2015 Logo
Add a photo to this gallery 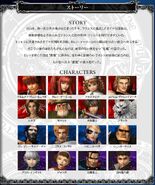 Bonus Mode
Add a photo to this gallery 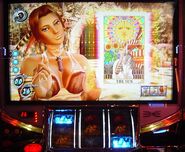 Add a photo to this gallery
Retrieved from "https://shadowhearts.fandom.com/wiki/Pachislot?oldid=35846"
Community content is available under CC-BY-SA unless otherwise noted.