Port of Southampton (also known as Southampton) is an area visited in Shadow Hearts: Covenant after riding a boat from Le Havre. Kato is here as well. Sefo, a rescued barfly meets them and instructs them to go to the Rhondda Mine.

After Gepetto and Karin get drunk for a while, Yuri and Kato talk in Kato's room about Sapientes Gladio, a group of terrorists. After Yuri finds Gepetto and Karin asleep, he visits the Graveyard and talks to Jeanne about Yuri's happiness and how he hasn't been happy since Alice's death.

The next morning in the sun, Lottery Member #15 can be played to get the Slow 1. Gerard and Buigen appear next to her as well. Up in a tower, a man marks the beginning of the Item Trading side-quest by giving you a piece of Dried Straw.

A Leonardo's Bear is found here, which should be equipped for the battle with Joachim's teacher, the Great Gama, who is met here for the first time and they battle. Yuri also finds out about Joachim's strange habit of finding weapons when he picks up a locker to use as a weapon. They then leave. 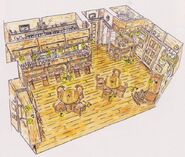 Add a photo to this gallery
Retrieved from "https://shadowhearts.fandom.com/wiki/Port_of_Southampton?oldid=38408"
Community content is available under CC-BY-SA unless otherwise noted.