First of the Mutant Apes to be created by Kato, he has a huge battery mounted on his body and wields fearsome electrical power. He is a deeply loyal person.

"Hear-No-Evil" Raiden of the Mutant Apes. Awesomely strong with the ability to fire electrical discharges, he is an honourable and sensitive warrior.

In the brief time that he and the other Mutant Apes are playable, he uses a unique gauntlet to pound his enemies into submission.

He can have up to three Hit Areas on the Judgement Ring.

He and the other members of her team also have access to a unique combo: "Lightning Flash". He is fought three times over the course of the game: 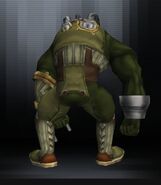 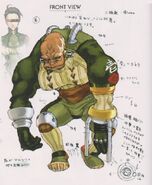 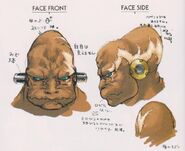 Human potrait of Hien & Raiden
Add a photo to this gallery

Retrieved from "https://shadowhearts.fandom.com/wiki/Raiden?oldid=37331"
Community content is available under CC-BY-SA unless otherwise noted.