Raiden possessed by the divine power of the god of thunder. With the pure power of lightning at his command, the Earth shakes at his approach. 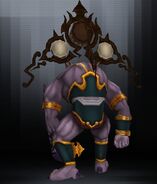 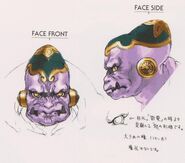 Raijin (雷神) is the Shinto god of thunder, lightning, and storms.

He is often depicted as a ogre-like demon, wearing a leopard skin loincloth or tunic, and carrying a large circle of drums on his shoulders - representing the sound of thunder.

He is often partnered with the god of winds, Fuujin.

Retrieved from "https://shadowhearts.fandom.com/wiki/Raijin?oldid=34028"
Community content is available under CC-BY-SA unless otherwise noted.