"Soul of the Judgement Ring that controls all fortune. Can appear at any time and gives ring power-up items. Its true form is a mystery."

Aya's father, who has worked near 40 years in the Judgement Ring world. Well respected for his achievements, even if his wife and daughter don't always agree.

He claims to be able to see the future, but it seems this is just a day job for him. At first he is put off by Yuri's sardonic attitude, but the two make up and develop a fine friendship.

The Ring Soul is married to a bubbly, energetic lady named Miyabi who is completely devoted to him, and he is also the beaming father of a babbling bundle of joy named Aya. He gets discouraged easily, but he's a dedicated family man and works hard to pay his mortgage. He does good impersonations.

He appears in sixteen different locations during the course of Shadow Hearts: Covenant: 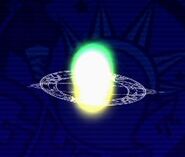 FtNW Appearance
Add a photo to this gallery
Retrieved from "https://shadowhearts.fandom.com/wiki/Ring_Soul?oldid=35768"
Community content is available under CC-BY-SA unless otherwise noted.