A character in Shadow Hearts: From the new world.

First seen early in the game after a child says he sees a ghost and hands Johnny a ring fragment. She gives items that improve your ring, though not status effects ones.

The will of the Judgement Ring that governs all destinies. Descending to the human world on an important mission, she's still a bit awkward and unused to things here. 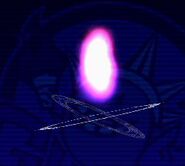 Add a photo to this gallery
Retrieved from "https://shadowhearts.fandom.com/wiki/Ring_Spirit?oldid=29401"
Community content is available under CC-BY-SA unless otherwise noted.