The house that Roger built in the grounds of the ruined abbey. It is uses highly advanced technology and looks almost like an alien spaceship. It is only accessible in Shadow Hearts and Shadow Hearts: Covenant.

Following the events of Koudelka, Roger built a new home, not too far from the ruins of monastery, both allowing him to watch over the site, and experiment with various technologies in peace.

By the time of meeting Yuri, he'd managed to develop a teleportation device powered by a treadmill, and a space-age vending machine. 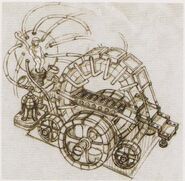 Retrieved from "https://shadowhearts.fandom.com/wiki/Roger%27s_House?oldid=37722"
Community content is available under CC-BY-SA unless otherwise noted.