Boss Enemy in Shadow Hearts: From the New World

Deformed denizen of the abyss. His overdeveloped arms took the place of his legs, and his lower body wasted away. Once he attacks, he will never give up the chase. 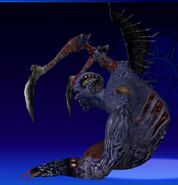 He is titled as a Marquis and Great Earl of Hell, and teaches art, rhetoric, languages, and gives good and loyal servants, and the favour of friends and foes.

It previously appeared in Shadow Hearts: Covenant as the namesake of the Ronove Crest.