Leader of the Inugami Clan in Katsuragi, she has great spiritual powers and uses the Fountain of Sukune to aid Yuri. Her youthful beauty belies her actual age.

Saki Inugami (née Hyuga) is Kurando's mother, and though she possesses an aura of mystery and mysticism, she actually has a rather oddball personality and likes to crack strange jokes. This is somewhat understandable as she is Ben Hyuga's sister, making her Yuri's aunt. Kurando notes that no one else from the Inugami side of the family behaves in such an offbeat manner. Because of her Hyuga blood, Saki is also capable of using the power of Fusion, and her four-armed demon form Kouenki is a force to be reckoned with. Yuri and the others taste this firsthand when Saki is temporarily possessed by Astaroth while spying on him in Mount Fuji's core. Saki seems to have a startling awareness of Yuri and Karin's destinies. She gives Karin a photograph of three-year old Yuri with his parents, saying that she wants Karin to see how he looks as a child, but is that truly why ...?

No, she wanted to see how Karin was actually Yuri's mother, and that she would have to be the one to let Yuri make the right choice. Saki predicted they would have to go back in time at the end, and they do. And Karin does indeed meet Ben Hyuga, who looks a lot like his son. You can see Karin becoming less attracted to Yuri, but she takes on a more motherly affection towards him.

Saki tries to encourage Anastasia's relationship with her son Kurando, for various reasons. 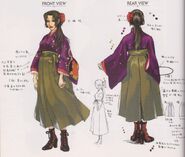 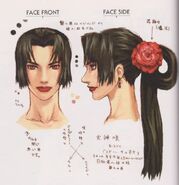 Retrieved from "https://shadowhearts.fandom.com/wiki/Saki_Inugami?oldid=33941"
Community content is available under CC-BY-SA unless otherwise noted.