She is a minor character in Shadow Hearts: Covenant.

Woman from the Goreme Valley who claims to have been King Solomon's maid. Strangely, she summons people to another world where they fight various monsters.

Sarah, the strange woman who as the ability to open a door to a different world. Although residing in Goreme Valley, Turkey, she is a servant of Solomon, the ancient king of Israel. If her claim to being a servant is true, her age would be calculated at nearly three thousand years old, despite her youthful appearance.

After meeting her, Sarah is capable of offering Yuri and the party battle arena type challenges, all that involve different rules to obtain victory. Should all the challenges she offers, and the Solomon's Key be fully completed, returning to Sarah will allow access to fighting the ancient king Solomon. 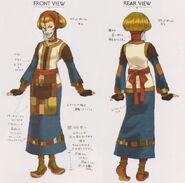 Add a photo to this gallery
Retrieved from "https://shadowhearts.fandom.com/wiki/Sarah?oldid=33866"
Community content is available under CC-BY-SA unless otherwise noted.