Ancient armored creature from prehistoric Japan. Though normally content to feed on moss, it attacks anything that gets in its line of vision. 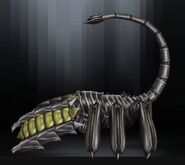 The English name appears to be a combination of "Scorpion" (obviously), and the ending of the Latin term for "Crocodile", "crocodilus".

The Japanese name, "Tsuno-gui" (角杙, "Horn") is the name of a very minor deity in Shinto myth, more commonly with the characters, "角杙神" ("Swelling Tip" - swell in the sense of plant growth).

Together with his sister-wife, Ikugui, they deal with the growth and protection of plants.