A location found only in SH:C Director's Cut.

It is a limited one-time only dungeon, although it can be revisited in its uncorrupted state.

Located in Japan to the north-east of the Forest of Wind. Home to an ancient spiritual set of woods, known as the "Sea of Wood". It is transformed into a dark realm of hate and spiraling red Malice, by the Shichifukujin living within.

Eventually it is returned to it's previous condition, and becomes the Sea of Woods once more.

You must have been to the Asuka Stone Platform at least once, and have spoken to the man in the Forest of Wind, for the Sea of Woods to appear on the Japan Map.

Appearing as a maze-like series of floating platforms, the player must activate seven small shrine-like structures, with the Azure Orbs to create a path through to the centre, and dispel the barrier of Malice protecting the boss.

Being thanked by the (now uncorrupted) seven luck gods. 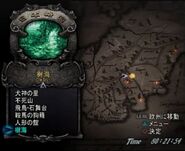 Map of the Sea of Woods

Map
Add a photo to this gallery

The Japanese name for the area Jukai (樹海), is generally used to describe both an area of dense tree-growth, and as a metonym for the forest of Aokigahara - a woods known for its notority as a popular suicide spot, and it's unusual silence (due to the highly clustered nature of the trees).

Historically too, it was said to be haunted by demons and restless spirits.

Retrieved from "https://shadowhearts.fandom.com/wiki/Sea_of_Woods?oldid=38116"
Community content is available under CC-BY-SA unless otherwise noted.