After beating the Wine Cellar, speak with Granny Lot in Le Havre.

The party will receive Solomon's Key, which will allow them to power up their Magic Crests if they are correctly placed on the map. Upon locating all 72 crests and placing them in the correct slots on the map, the ultimate crest, Solomon Crest, will be unlocked.

Magical item created by King Solomon, taking the form of a book or a ring. Correctly position the crests to draw out all their power. 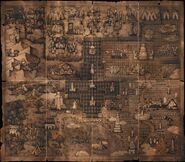 Solomon's Key is a reference to the Lesser Key of Solomon, also known as the Clavicula Salomonis Regis*, and the Lemegeton, but generally known collectively as the Ars Goetia* after the most famous of its five texts.

It's a 17th century grimoire on demonology written by an anonymous author (or authors), compiled from much older texts and sources, with the oldest text being written in the 12th century.

It came to prominence in the early 20th century due to the publication of the text by Samuel Liddell Mathers, one of the founding members of the Hermetic Order of the Golden Dawn, and Aleister Crowley, one of its more notable members.

The Ars Goetia text itself is a list of seventy-two demons, with descriptions to their natures, the number of demon legions they have under their control, and their rank among the hierarchy of hell, ranging from King, Prince, Count, President, Marquis, and Duke.

Each demon is given a unique sigil, and their appearance is generally associated with the illustrations by Louis Le Breton who produced them for the similar text, the Dictionnaire Infernal.

The text still is influential in pop culture, particularly with fantasy stories dealing with hell, or demons, and especially in video games where they frequently appear as enemies, or referenced in magic and spells.