Violent and wild god of ancient Japan. Revived by Kato.

The battle with this demon (who is, in reality, Kato) has you off against Susano-O, Kusanagi Sword, Yata Mirror, and Yakakani Gem.

Most powerful of the ancient Japanese Aramitama gods, he was resurrected by Kato's nihilistic spirit. His fury threatens to bring the Earth to utter ruin.

Susano-O armed with the Three Treasures

Final Revelation
Add a photo to this gallery 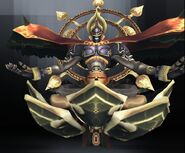 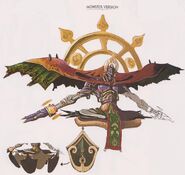 Susano-o (須佐之男) is the Japanese god of storms and one of the more prominent members of the Japanese pantheon.

In some of the common creation myths, he challenged his sister Amaterasu to a contest in who can create the most gods. Amaterasu spawned some from Susanoo's sword, while Susanoo did the same with Amaterasu's necklace. He declared himself the victor and threw up a storm that destroyed heaven's weaving hall. Disheartened, Amaterasu fled into a cave and the sun failed to shine. All the gods lured her out eventually, forcing Susanoo out of heaven.

In another myth, he encountered a family whose daughters were devoured by the eight-headed serpent Orochi. And it was due to devour their eighth and last daughter. Susanoo agreed to help them, in exchange for their daughter in marriage. They agreed.

Susanoo lured Orochi to drink some sake to the point of drunkeness, then he slew it. He was credited for finding the Kusanagi sword, the imperial regalia sword, in the monster's tail.

Retrieved from "https://shadowhearts.fandom.com/wiki/Susano-O?oldid=37076"
Community content is available under CC-BY-SA unless otherwise noted.