Bronze giant built by Hephaestus, god of smithery, Molten lead running through its body provides it energy sufficient to power its massive body. 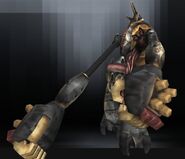 Talos' extending arms
Add a photo to this gallery

Talos is the name of a bronze giant automaton in Greek myth, who was tasked to protect the island of Crete.

Brought to life by the gods, he was animated by a single vein of ichor - the blood of the gods - running through his body, with the only outlet being stopped by a nail.

During the adventures of the Argonauts, the sorceress Medea tricked him into removing the nail, causing his precious burning lifeblood to flow from him, killing the seemingly indestructable giant.

Retrieved from "https://shadowhearts.fandom.com/wiki/Talos?oldid=30107"
Community content is available under CC-BY-SA unless otherwise noted.