An embodiment of evil intentions. Gives off a foul pestilent air that is enough to end the lives of any unfortunate, sensitive souls who happen to breathe it in.

Tamaris is a light class monster so if you're using Shania watch for her HP!

Tamaris likes to use magic attacks more than physical so Arc Cure should be provided. Since Tamaris is light fuse Shania with Thunderbird, use Arc Gale to shorten the turn interval for everybody and use magic dark attacks to pound Tamaris.

But Tamaris can use Barrier to increase her Special Defense. Also when her HP gets low she will use Spirit Ward, one of the most annoying abilities which banishes one of your character's from the battle so be prepared! It will be easy if you equip someone with , Blood loss because it will die very quickly. If you want all snap cards, you should snap this at least 7 times. 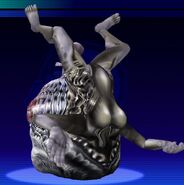 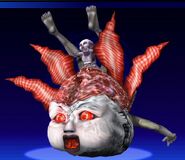 The name derives from the Japanese word "Tama" ("Sphere, ball"), and a misromanisation of the word, "Malice".

Retrieved from "https://shadowhearts.fandom.com/wiki/Tamaris?oldid=34470"
Community content is available under CC-BY-SA unless otherwise noted.