Monster from Spain. It appears on the tenth day of the tenth month and is said to be the incarnation of husbands wishing to punish their unfaithful wives. 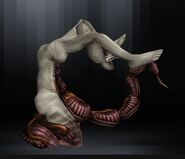 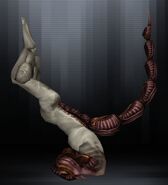 Tammuz is an alternative name of the Akkadian fertility god, Dumuzid.

He features in numerous myths, but is closely associated as the primary consort of the goddess, Ishtar - goddess of love and war. Particularly in one myth, where he is punished for failing to properly mourn Ishtar's (temporary death).

When Ishtar is restored to life, in a fury she allows the demons of the underworld drag him there to torture him as her repleacement. She later regrets this, however, and allows him to spend sixth months in the realm of the dead, and the remainder with her - her sister temporarily taking his place.

In another myth he is transformed into a Roller Bird, with a broken wing.

Retrieved from "https://shadowhearts.fandom.com/wiki/Tammuz?oldid=30020"
Community content is available under CC-BY-SA unless otherwise noted.