Mystery man who showed up suddenly in Wales. He says that he is fighting against the secret society, but he has ulterior motives of some kind.

A British spy investigating the secret society, Sapientes Gladio. He later becomes known as Lawrence of Arabia when he fights alongside the Bedouins.

First encountered in Wales, Thomas is a mysterious man and an old acquaintance of Carla's who turns out to be a British spy investigating Sapientes Gladio. He offers information for the group on Sapientes Gladio's activities. It is revealed near the end of the game that he wishes to marry Lucia. 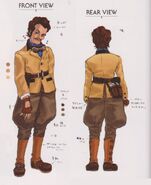 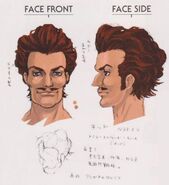 Thomas Lawrence is famously known as T.E. Lawrence, or "Lawrence of Arabia." He and the British hoped to get the Ottoman Empire out of the war, allowing them access to the needed oil fields of Arabia to fight the Germans.

Retrieved from "https://shadowhearts.fandom.com/wiki/Thomas_Edward_Lawrence?oldid=33875"
Community content is available under CC-BY-SA unless otherwise noted.