Highest-ranked Iron Soldiers. Their highly-mobile powerful suits give them awesome power, but are a fifty kg burden when out of power. 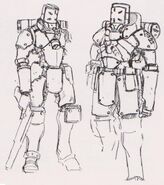 And shares characters with vajra - a supernatural weapon of Hindu origin, used as a symbol across Asia and the Indian sub-continent to represent firmness of spirit and spiritual power.

It shares its name with a 1910s era Japanese battleship, itself named after Mount Kongō.

Retrieved from "https://shadowhearts.fandom.com/wiki/Titanium_Soldier?oldid=34034"
Community content is available under CC-BY-SA unless otherwise noted.