Tsukiyomi is a fusion monster from Shadow Hearts: Covenant. It is the first fusion that Kurando aquires, however, it is encounted first as a boss and is the only compulsory fusion that Kurando may get through the game. It costs 5 Sanity Points per turn to fuse into it.

Moon Goddess that grants her powers to those who combine a noble spirit and a pure body. The light of the moon can save even those who are lost in darkness.

Unlike Jutendouji, Tsukiyomi's specials focus primarily on area-of-effect attacks, enabling her to damage large groups of enemies. Although, her skill set is rather expensive to constantly use.

Tsukiyomi (or Tsukiyomo) is the Japanese god of the moon. Not many myths surround him, except for one when he killed the food goddess out of disgust. It could also be a contraction of the Japanese words tsuki ("moon") and yomi ("the Japanese underworld"). 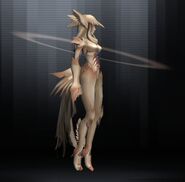 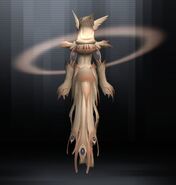 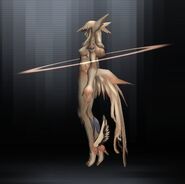 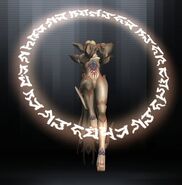 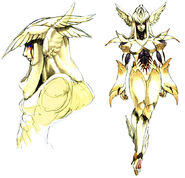 Add a photo to this gallery
Retrieved from "https://shadowhearts.fandom.com/wiki/Tsukiyomi?oldid=33845"
Community content is available under CC-BY-SA unless otherwise noted.