A maggot spirit sprung forth from the corpse of a wrongdoer.(*)

Creature found in Sea of Woods, in the Director's Cut edition of the game

Rough Translation:
A spirit of maggots that welled up from the corpse of a villain called "Tsunemoto" who was executed four hundred years ago. Regularly, millions of Tsunemotomushi would spring forth, and bury the execution grounds in a swarm of Tsunemotomushi.* 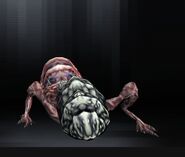 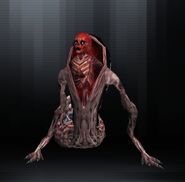 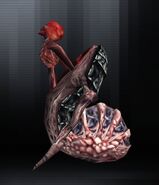 Tsunemotomushi derives from a mythical insect in Japanese folklore.

A rogue samurai who led a gang of thugs, murderers and rapists terrorised a small town, but was eventually caught and hanged for his crimes.

His remains were buried at the base of a tree. Every year after his death, from insects would emerge from the tree, all with his face, and they would bring misery and bad luck to those who saw them.

The tale seems to be a folk tale regarding the unusual shaped chrysalis of the Chinese Windmill Butterfly.

Retrieved from "https://shadowhearts.fandom.com/wiki/Tsunemotomushi?oldid=37017"
Community content is available under CC-BY-SA unless otherwise noted.