Enemy in Shadow Hearts: From the New World.

A monster made up of two rotting birds. A composite creature said to be the result of some demon's game. Grew into a cruel and very unstable creature. 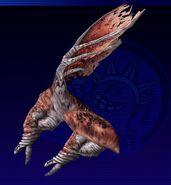 Xantak is a misromanisation of Shantak; an immense bird-like monster found in some of H.P. Lovecraft's works, most notably The Dream-Quest of Unknown Kadath.

They are described as bird-like creatures larger than elephants, with a pair of bat-like wings, a pair of strong talons, a slimy, scaley body, and a face that resembles a toothed horse.

Retrieved from "https://shadowhearts.fandom.com/wiki/Xantak?oldid=34443"
Community content is available under CC-BY-SA unless otherwise noted.