He is fought in the second and final forced trip to Purgatory and a spectral form of him is fought in a sidequest later in the game.

Garan possessed with the awesome power of Yama, King of Demons. This radical transformation of Garan's can only exist inside the boundary. 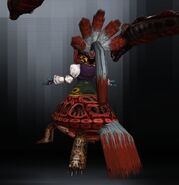 Yamarāja (also as "Yama" - "-rāja" is an honourific suffix denoting "king", or "lord") is the demigod of death, in early Hinduism, where he is charged with punishing the sinful.

Some tales state that he was the first man ever to die, while others maintain that he has always been a god of death.

Despite his origins in Hindu myth, his worship and customs spread across Asia, where he perfoms a similar role - directing souls to Naraka (Buddhist purgatory) to be punished, or renewed in the cycle of Karma.

He also, however, is a protector figure, and deliverer of justice in his aspect of a Dharmapala ("Wrathful God").

Retrieved from "https://shadowhearts.fandom.com/wiki/Yama_Garan?oldid=36992"
Community content is available under CC-BY-SA unless otherwise noted.