This is a list of all the weapons Yuri can equip in Shadow Hearts and Shadow Hearts: Covenant. Yuri's weapons vary from gloves, fists and claws. The list of weapons are all listed in the order they appear in the in-game inventories. 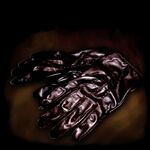 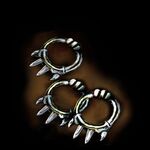 Made of a hard black steel and used for punching.

Description
This handheld weapon has sharp blades affixed to it allowing for slashing as well. It is made of a powerful black steel and is easily carried. 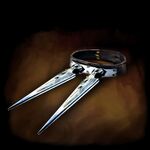 Description
A favored weapon among Eastern assassins. Its unusually long blade and frightening appearance make it a weapon to be feared. 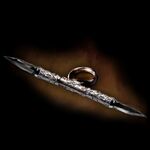 Description
An ancient weapon, the middle finger passes through a ring and it is clutched in the fist. When mastered, it can be used to block an enemy's sword. 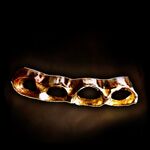 Description
The dream of any rough-and-tumble brawler, they are made of hand-forged brass and can raise the user's punching power enormously. 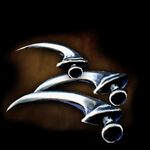 Holy silver claws that are easy to use.

Description
Silver claws gripped between the fingers. Easy to use and accurate due to their light weight. An excellent weapon for the powerful fighter-type. Very valuable. 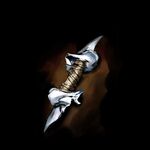 Made from the enchanted fang of a wolf king.

Description
A weapon created from the fang of the wolf king, Vadelg. It is said to hold great power but no details are known because it has never been found. 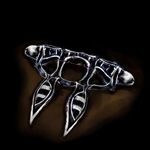 Used by an ancient war god in magic-sealing.

Description
This weapon was said to have been used in ancient days by the god of war and that its wielder can summon the power of Ashura. Its true origin is a mystery.

These are all the weapons Yuri can obtain throughout Covenant.

Description:
A knuckle mounted weapon. The rusty spikes make the wounds it inflicts all the more painful.

Description:
A common weapon for hand-to-hand combat in the middle ages. Forged from incredibly durable darksteel.

Description:
Created by a famed bearfighter for hand-to-hand combat against the beasts. The spikes penetrate a human skull just as easily as bear-hide.

Description:
A mechanized glove created during the industrial revolution. The blades can be vibrated during use to cause viciously deep wounds. Must be oiled frequently.

Description:
What kind of bone was used to make this? Features distinctive gruesome claws. Said to curse and poison those it cuts. Glows and groans as night falls.

Description:
Gruesome weapon capable of disemboweling enemies with a single hit. The blade drips with blood no matter how thoroughly they are cleaned.

Description:
Designed to mimic the claw of a tiger-like spirit that masquerades as a cat and attacks unwardy farmers. The wrist guard is covered with sharp claws.

Description:
Venerated by people who worshipped the turtle. Features a tortoiseshell grip and a laminated blade that cause jagged, hard-to-close wounds.

Description:
The fang of an ancient beast. Forged in the flames of a phoenix's tail. Even if broken during battle, it will repair itself by the next day.

Description:
A pair of combative organisms that infest the arms of the user. Attacks enemies of their own free will--and occasionally their host as well.

Description:
Calls forth the power of Tyr, Norse god of war. Capable of obliterating an entire planet. Fearful of its power, Roger hid it on the Moon.

The following weapon is an exclusive to the Director's Cut edition of the game, though it can be obtained via a cheating device.

Description:
A puppet with a split personality. Attacks enemies on sight. Occasionally engages in amusing dialogs with itself.

Retrieved from "https://shadowhearts.fandom.com/wiki/Yuri%27s_Gloves?oldid=37727"
Community content is available under CC-BY-SA unless otherwise noted.